Political hydrography of the Jordan River

In this section, we will present a brief sketch of the hydropolitics involved in the water resources of the Jordan Basin, together with some references to literature.

[UNDER CONSTRUCTION: more information needs to be added to explain the situation on the ground; e.g. separate pages on the National Water Carrier, the King Abdullah Canal, the situation on the border of Israel-Lebanon-Syria, the Israeli-Jordanian peace agreement of 1994, the agreements between Israel and the Palestinian Authority; Links to locations on satellite imagery and other illustrations; Literature references]

The hydropolitics and withdrawal of water from the river are a key feature in the geopolitical constellation of this region, which incudes the continuing belligerent situation between Israel and Lebanon and Israel and Syria since 1948, the annexation of the Syrian Golan Heights by Israel, the occupation of the Palestinian West Bank by Israel and its policy of settlement and appropriation of agricultural land, and the relations between Jordan and Israel based on the 1994 peace agreement.

Usually, three streams are identified as the sources of the Jordan River: Hasbani, Banias and Liddan (Dan).

Flowing south, the Jordan passes through what remains of the Hulah marsh lands, which were drained in in the 1950s to make place for irrigated agriculture - before the river continues south and enters Syrian territory before it finishes its journey as a border river between Israel and Syria and enters the Sea of Galilee at its northern tip.

The Sea of Galilee, a sweetwater lake also called Sea/Lake Tiberias or Kinneret, is clearly not a sea but a freshwater lake, with Israel and Syria (Golan Heights) as riparians, on the western and eastern half respectively. The natural outlet of the lake in the south is dammed at Degania to most of the water from leaving the lake, turning the lake in a huge reservoir. The water is then diverted into the National Water Carrier [create page], a network of pipes, canals an pumping stations, and carried outside the Jordan River basin, towards the Israeli coastal plain and the northern Negev desert; growing demand in these areas lead to over-pumping, threatening the sustainability of this freshwater body but also leaving no water for other riparian users.
[section to be added: desalination in Israel and the potential reversal of the flow of the National Water Carrier to preserve the Lake of Galilee and the lower Jordan basin]

As the remains of the Jordan River continue to travel southwards, the river forms the border between Israel and Jordan and -further south- the border between the occupied Palestinian West Bank and Jordan. On that western bank, the Palestinians are banned from accessing the Jordan valley and have no right to its water resources, and only limited rights to the groundwater resources of the Mountain Aquifer [create page]. On the other hand, Israeli agricultural settlements [create page], which are illegal under international law, benefit from the occupation of the land and almost unrestricted exploitation of its resources. East, on the Jordanian side of the river, streams like Zarqa River [create page] run dry in the valley.
When Jordan and Israel signed their peace agreement in 1994 [create page], they settled for a status quo on access to water. Palestinians have no sovereingty over the water resources of the West Bank (surface water and groundwater) [create page]; their access is restricted and under surveilance of the Israeli military authorities.

Finally, the river reaches its end, at the lowest point on land near the Palestinian town of Jericho. Here the last buckets of heavily polluted, brackish water find their way into the Dead Sea [create page].

This map from the 2017 annual report by the Water Authority of Jordan (WAJ) shows the different groundwater basins in Jordan. Except for 2 basins in the eastern and southeatern part of the country, all the groundwater basins are being over-exploited, with abstraction exceeding their safe yield. This is especially the case for the Zarqa basin and Azraq basin (serving the cities of Amman and Zarqa, at a rate of 188% and 290% of the safe yield resectively). This practice will without doubt affect the quality (risk of contamination and pollution) and the renewability of the water resources.

Additionally, this map clearly suggests that the groundwater basins should be considered as transboundary water resources, which are also being exploited across the border, like the Disi Aquifer. 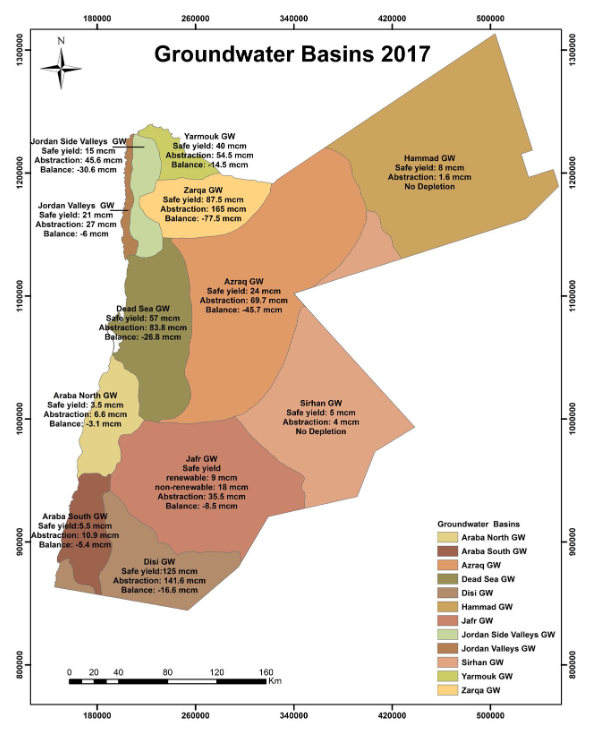 Jordan groundwater basins, from on Ministery of Water and Irrigation 2017

This is an annotated collection of some figures on water availability, water use and access to water in Jordan. 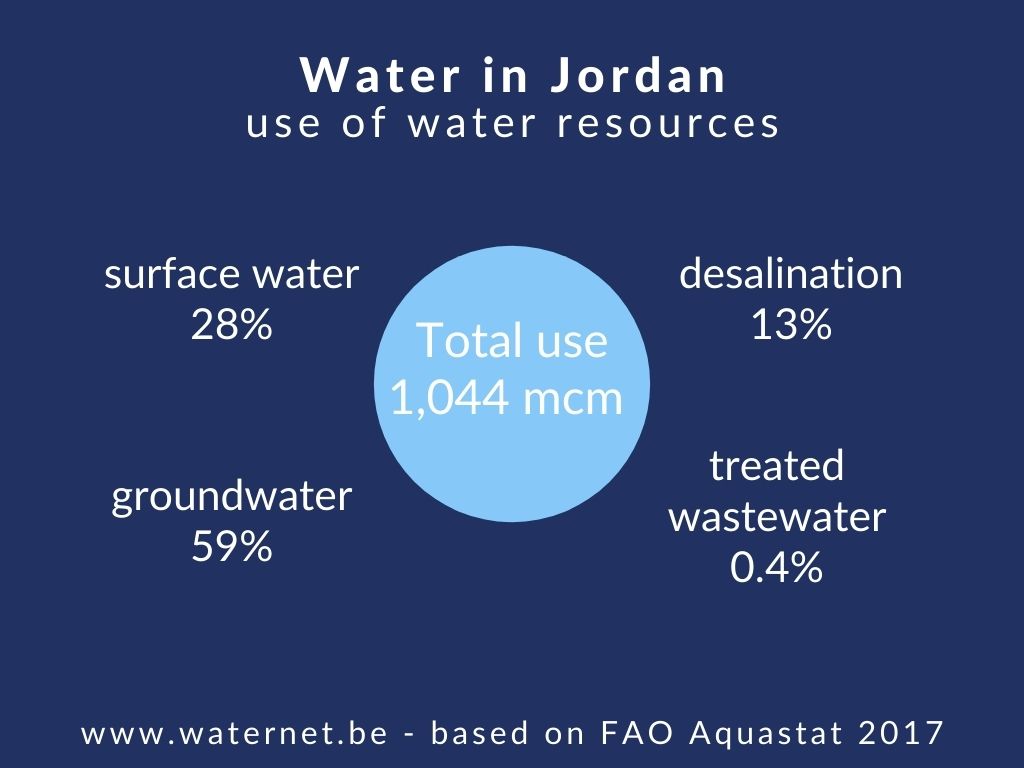 Total water use for human development (agriculture, industry, municipal) is 1.044 km3 or 1,044 million m3.
This is the amount of water that is taken out of the natural environment and artificial storage systems, from non-renewable groundwater resources, re-used drainage and wastewater or desalinated water.
This is 109% of the amount of available renewable freshwater resources (once we have the data, it will be better to compare it with the exploitable resources).

If we look more into detail, withdrawal from surface water is 288,8 million m3, and groundwater (renewable and non-renewable) is 614,8 million m3, or 903.6 million m3 in total. Desalination (136.3 million m3) and re-use of treated wastewater (4.2 million m3) are non-conventional water resources.

Read also more in the fact sheet on groundwater extraction in Jordan.

Average water use: 103 m3 per person (population size of 10.1 million in 2019).
With a score of 4.56 on the Water Stress Index, Jordan is the 5th most water stressed country in the world (See: World Resource Institute, Aqueduct country rankings).

Withdrawal per sector and relative efficiency

Of the total withdrawal of 1,044 million m3, agriculture is the biggest consumer of water in Jordan; it takes more than half of the water withdrawal but adds just 5% to the national wealth. In comparison, industry, with 3.1% adds 61% to national wealth.

[This section is under construction]

Our own fact sheets:

Some links to external data resources on Jordan Basin countries:

Institutions for water management and water resources in Jordan

Several water strategies and related development strategies have been published on different websites. We file these documents off-line, in case links to their original location are broken

"The water investment capitalizes on areas of improvement according to the government’s Water Strategy to encourage efficient use of natural resources, to augment water supply, to expand wastewater treatment and to minimize water losses. The current five prospective investment opportunities are:

1. Aqaba-Amman National Conveyance project (AAWDC Project): To enhance the Kingdom’s national water security by producing potable water through desalination at the Gulf of Aqaba and transferring 150MCM/Year of additional water to Amman.

2. As Samra Treatment Plant (3rd phase/2nd expansion): To expand the capacity of the plant by an additional treatment capacity of 100,000 CM per day and to establish a solar power plant with 10 MW capacity.

4. Hisban Brackish Water Desalination 10-15 MCM/Year: The project aims to augment water sources by 10-15 million cubic meters per year (through the drilling of 10 wells) and to develop solar energy to provide about 15MW.

5. Al Ghabawi Wastewater Septic Tank Facility Project: The project aims to construct a new septic 25-tank facility to replace and relocate an existing facility currently co-located at Ain Ghazal. The capacity will be 25,000 cubic meters per day located at Al Ghabawi. In the same context, and with a view to reduce water losses to approximately 30% by 2025, the ministry has implemented a large number of water projects which include the construction of new pumping stations, distribution networks and subsectors of the National Water Carrier system; which all leads to water empowerment to face the challenges, developments and growing needs while lifting the cost recovery rate of operation and maintenance to 100% in 2021, as well as the proportion of the total cost recovery to 74% including a reduction of governmental subsidy for the water sector."

Institutions for water management and water resources in Israel